Flemington deli proudly displays sign , leave a $1.00 for the mexican and $3.00 for the white girl 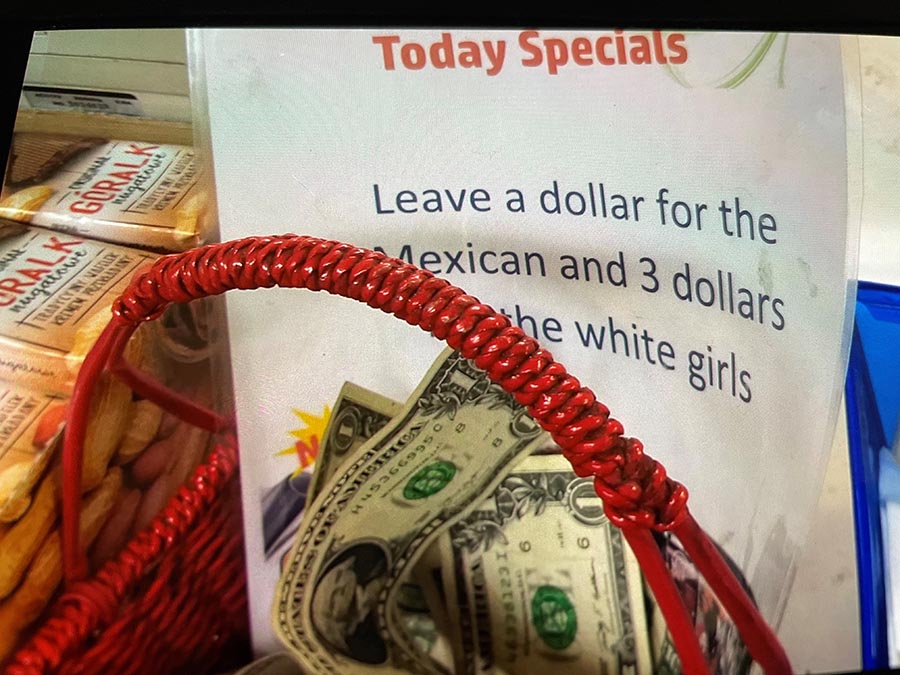 2020 has finally come to its inevitable conclusion as Americans say good riddance to a miserable year, and say hello to a better year, as the Vaccines for COVID-19 are now being distributed, albeit more slowly than predicted by our government leaders.

The people of America and indeed the entire world, saw the darkest of days stretch into months and now a full year. And the misery is not done yet with more than 250,000 Americans dead from COVID-19 and another 100,000 deaths predicted by the end of January. In California alone, one person dies every 7 minutes from COVID-19 as this is being written. We also now have a mutated strain of the COVID-19 virus that is far more contagious.

Americans have been depending on their local, state, and federal representatives, those politicians who had much promise when we elected them. However, deep down, we knew our representatives wouldn't really do much in the grand scheme of things. While the ripple effects of this pandemic are sure to last a decade or more, particularly in the financial lives of many Americans.

Those who were financially struggling are now almost out of resources if not broke. Almost half of small businesses have already or will become extinct fossils. All of the blood, sweat, and treasure of building a small business is now up in smoke, and many will not make a comeback regardless of how well America snaps back in the coming years.
New Jersey residents have had their heads shaved by local powers-to-be under the guise of COVID-19 activities.

One area of New Jersey and its officials have taken advantage of its citizens during the COVID-19 pandemic.
Tucked away in Flemington borough and Raritan Township in the western part of NJ in Hunterdon County, some unscrupulous leaders of business have taken serious advantage of the citizens who live there.

County offices and some businesses hiding behind the premise of COVID-19, have capitalized on the misery the pandemic caused in this state.

Flemington Shopping Center. In NJ, we blindly trust our savings believing banks are sound. Calling out these branches for questionable practices.

PNC, has some of the most arrogant customer service representatives that I have ever seen. The disinformation and poor leadership style lead by assistant manager Kristen Dutney of the 202 branch is ridiculous.

Then there is the Stop-N-Shop supermarket chain which has to be one of the ugliest supermarket groups in Hunterdon County.

In Hunterdon – an area that is now 27% underwater on homeownership – it didn't take long for that lame supermarket chain to capitalize on the pandemic and start gouging customers with off-the-chart pricing on necessities. Cleaning products skyrocketed like they had the last bottle of Clorox on Earth, and the last roll of toilet paper. Just shameful.

Questions were raised about why Clorox bleach regularly priced around $3.49 a gallon skyrocketed to over $11.00 a gallon. Our first inquiry was a call to the Clorox Corporate Offices, which we believe sets the price for the stores. Clorox Corporate Offices denied our claim in a written statement stating that retail prices are set by retailers.

The price was never COVID-19 adjusted, meaning it was simply a 'normal price increase.'

Next, we called Stop-N-Shop regarding Clorox pricing, and the management laughed it off with a verbal statement saying, "It's worth what the market will bear.''

Back in March the local 7-11 located on US 202 was reported to corporate for what was considered unethical practices. Months later only to be caught again overcharging for cookies, shorting customers of change and bait and switch pricing.

Residents of the area are still scratching their heads, wondering why the city dump was closed due to Cov-19 for weeks just to reopen. Then close again days later to observe ''Employee Appreciation Day''. . Not to be outdone by Raritan Twp. tax offices, charging early taxpayers interest without notification on the following year increase.

A small list of some of the worst offenders, but Sun Ridge TownHomes takes the trophy home for 2020. From our reporting, the old management left leaving a bad taste with homeowners. Residents information was being shared, management indulging in substance abuse while spending thousands of dollars on ridiculous expenditures such as golf carts bought but never used.

At the tip of the development are some of the best townhomes, if you can stand having VIP snitch-neighbors. One such family has a man of the house who is a very important person; the guy who gets people back by telling horse-manure stories about his 'greatness.'

He's the big guy in the neighborhood. But no one really pays him any attention. It's amazing he calls the police on his neighbors just to be told the noise is from the bank trying to get into a unit up for sale . He is constantly aggravating someone in the community.

Last month he was shining a spotlight in other people's units. When he was told that he was being a nuisance, he told people to buy some blinds for their windows. He can always be seen doing jumping-jacks and stretches at the edge of his driveway to show off, then stopping until a passing car or walkers go by.

His days are spent peering at neighbors through his window, or outside avoiding his family.
His wife most likely threw in the towel long ago and clearly can't reel in her husband.