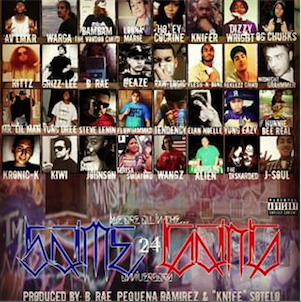 Last year, Chicago children had come together to make “Put Down The Gun” for its own violence epidemic; LA will always have its own rampant gang-related murders. As a kid growing up in Los Angeles, the original song was a big deal, and I was all for it. The “Same Gang” 24th anniversary song was conceived by a real gang member of a Maravilla gang by the name of Marvin Sotelo—known as “Knife” by law enforcement.

“I got this idea, B,” he said. “I’m trying to do something legendary…something that has a moral and point that still applies today.” And the rest was history.

According to producer B. Rae, Sotelo came to him with the conception for the track; he had sponsorship from The Ed Tyll Show and the cosign of Pequena Ramirez, but he needed Heller’s support to secure sampling clearance from Dre. Heller looked out, impressed with Sotelo’s vision, and arranged to have Universal Music International press and distribute the project for free. The original song went platinum, and without a doubt contributed to the peace treaty that was eventually settled on in LA’s streets (until it all fell apart again). Happy anniversary to this all-too-brief moment in time, hopefully LA catches it’s second wind in tranquility with the 24th anniversary charity record of “We’re All In The Same Gang”.