The Shanghai Fashion week ended two weeks ago and once again it was the mainstage in China for old and new local and foreigner designers and brands.

The event continues to move forward under the theme "The Future is Now," with much of its momentum coming from young and independent designers and for the first time the Xintiandi location was divided into two areas, the Red and the Blue halls.

Let’s take a look at some of the hottest shows of the week.

The Chinese brand born in 2012, strives to transform the original spirit of naturalism into contemporary clothing culture and lifestyle.

This season's design inspiration is "thinking about the concept of eternity". The designs were built on the basis of destruction, fusing two extreme opposite temperaments. The show was designed by the artist Wang Ziyue. A wasteland, combining red soil with geometric installations to introduce an illusory space. 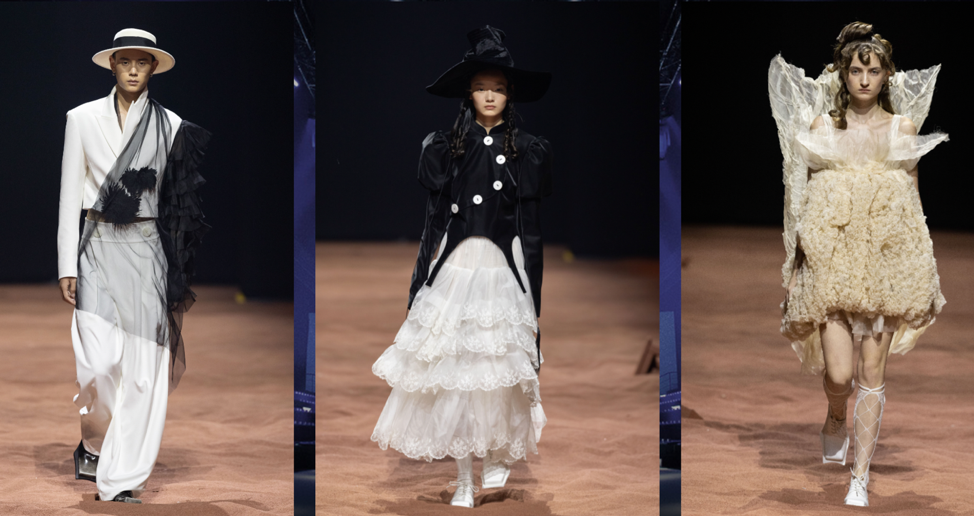 Founded in 2017 by the designer Zhi Chen, the brand specializes in knitwear, aimed at changing the usual impression of knitwear through daring silhouettes and bold colors.  ZI II CI IEN pursues breakthroughs and innovations in knitting technology, defines knitting in modern language, and takes the concept of "turning good design into life necessities" as the concept, and strives to subvert the public's view of "sweaters". Geometric pattern printing contrasts with various fabric textures are presented in this collection titled “The World is Spoiled”. Flowers and butterflies are the main themes of this series. The brand debuted Bilibili’s virtual idol, Azi (阿梓), during the show, the ideal example of how Shanghai Fashion Week casually incorporates AI into everyday life. 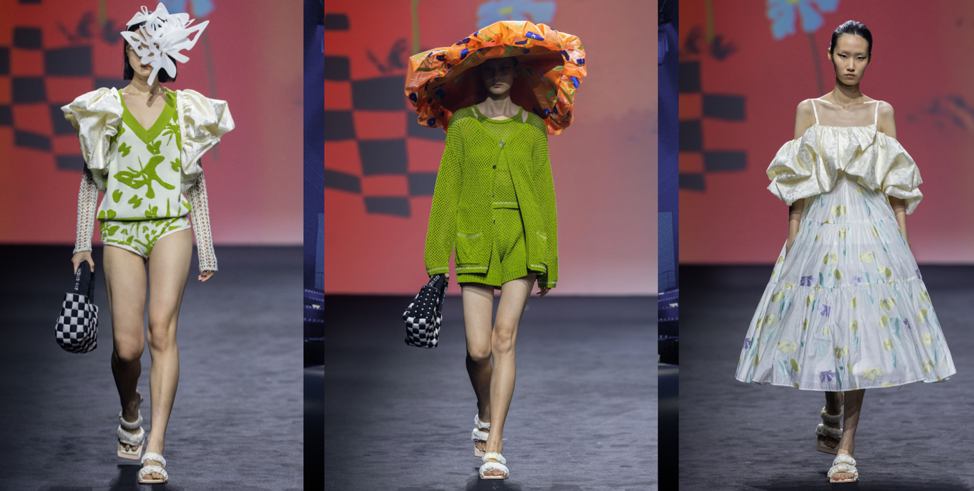 Founded in 2014, YINGPEI STUDIO is a Shanghai-based womenswear label. The brand is inspired by vintage aesthetics and reinvents them with a modern twist. The show of this year, named "The Cutting Moments," urges viewers to take a breath and look at things from different angles. In the space of the catwalk there were nine hanging glasses that, combined with the light change, cut the viewer's perspective into fragments with a uniform rhythm. The brand invited soprano Yi Liga to perform during the show presentation. 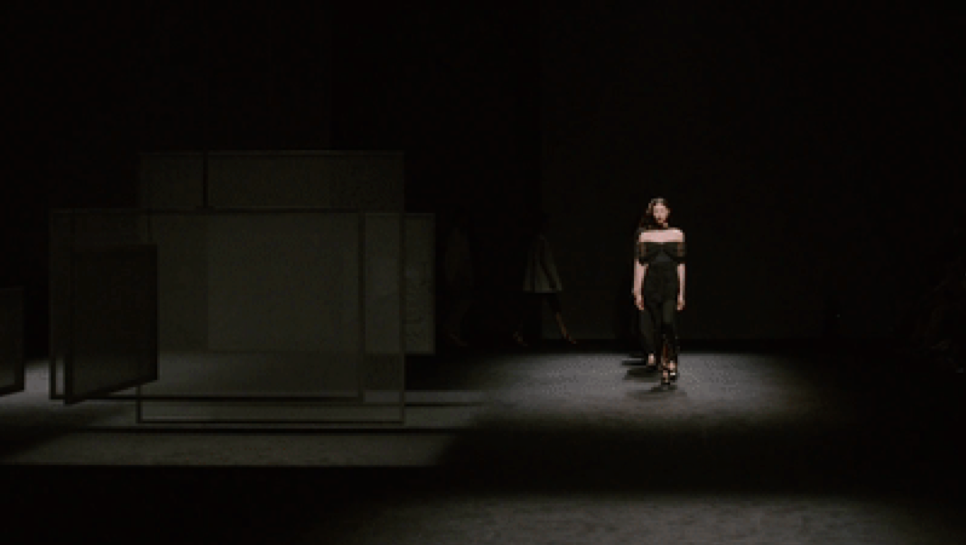 Mithworld was born in 2019 by designer Demon Zhang and it's a brand encouraging women to find a balance between the external world and their inner self.  This season, the brand sought inspiration from five kinds of music, folk, POP, electronic music, rock, and R&B. The fashion show is titled "MU5IC PARTY". The letter "S" in "MUSIC" is replaced with the number "5". It is a pun, symbolizing that the season's collection has different sounds and five different styles. 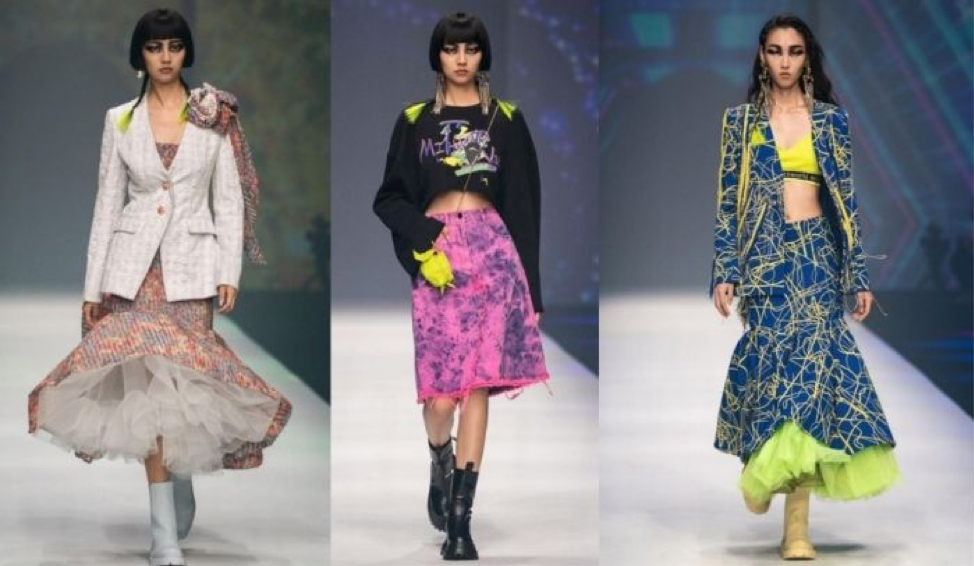 Established in 2015 in Shanghai, the brand is founded by famous Chinese singer Joker Xue together with designer Zhang Fan, and aims at bringing streetwear and street culture to more people’s daily lives.  Based on the concept of UNFOLD YOURSELF, the title of the SS2022 collection was "DANGEROUS CAMP". Many functional fabrics have been added to the overall design. While being trendy, it also takes daily travel functions into account and, despite being mostly a man's brand, incorporates women's clothing design into the catwalk. The brand, for this occasion, worked with autistic painter Bi Changyu. 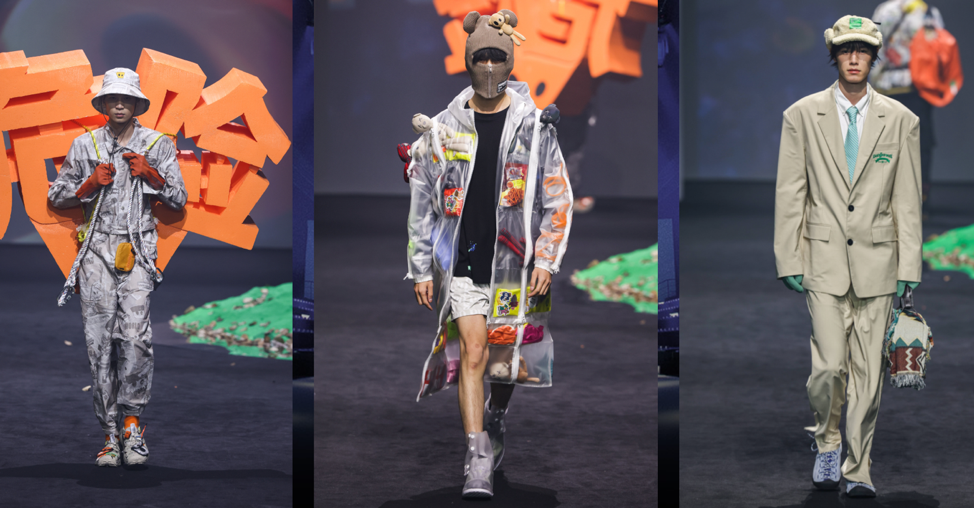 In this season of Shanghai Fashion Week, the MIMBLANCHE 2022 Spring/Summer collection created a dreamy wardrobe with a romantic approach. The designer depicts a dreamy social wardrobe in a romantic way, which brings new inspiration to urban women's outfits for the new season. MIMBLANCHE, inspired by artist Anna Valdez's style, used bright colors, animal and plant prints, and chic tailoring to ingeniously blend women's fashion and painting art, capturing the beauty in life. The brand painted a romantic view of the world in this collection: beautiful people will meet beautiful things unexpectedly. 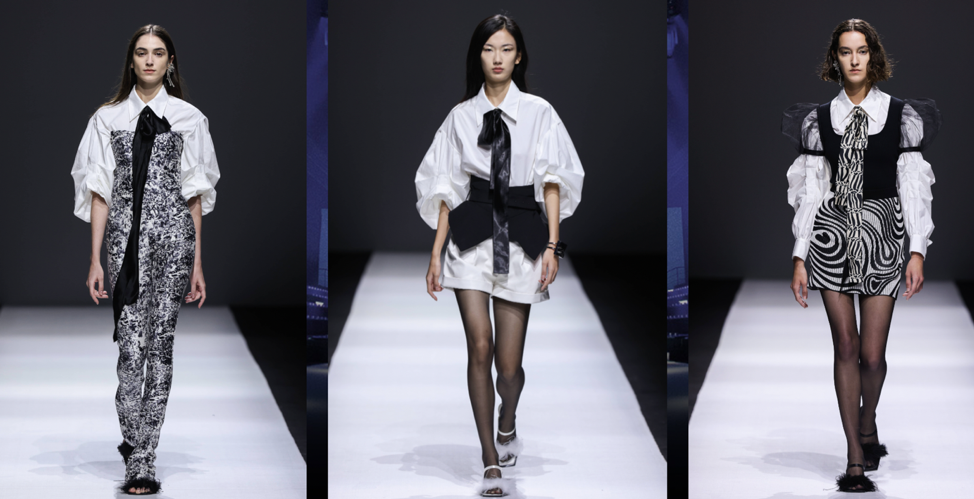 PRONOUNCE is a brand established by Yushan Li and Jun Zhou in 2016 that is now based in Milan and Shanghai. The brand, which integrates Eastern and Western aesthetic philosophy, draws inspiration from the circle, combines traditional craft aesthetics with contemporary fashion tones, and conveys the charm of "nothing" and "eternity" in a geometric sense. Following the release of this series, “Circle ○”, during London Fashion Week, the collection was re-integrated and released in the official show of Shanghai. In this season the brand continues to explore the "beings of beings", people coming from different backgrounds in a fashion show in which the change of dress is fluid and the changes in the models' personalities and in specific scenes became a "circle" again and again. The circle design creates a strong visual impact and a full sense of the future. The circle is a symbol of equality, acceptance, exploration, infinity. 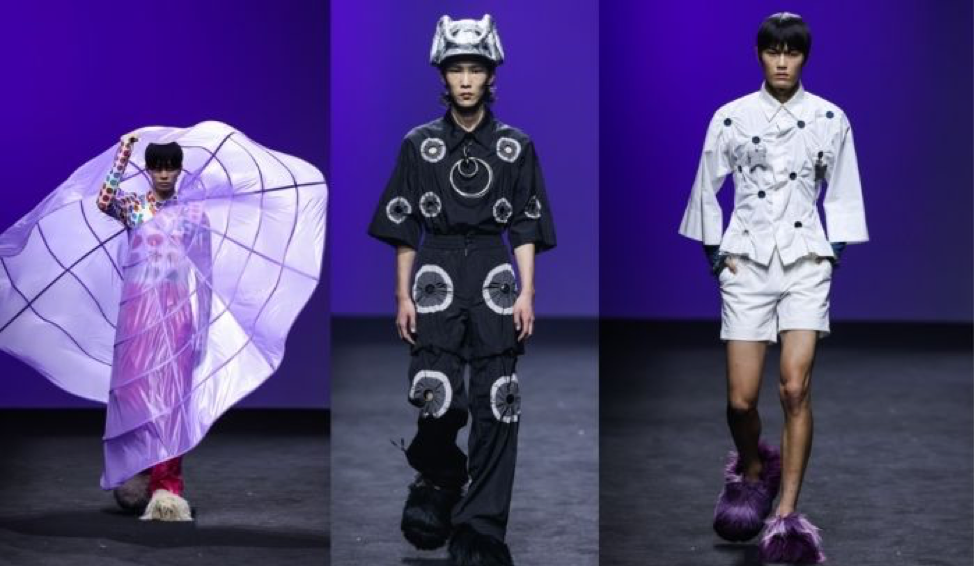 OqLiq, a street brand from Tainan, transforms the oriental concept into a contemporary style, and incorporates high-end functional style into the tailoring of street fashion, forming a simple oriental design that interweaves the old and the new. The clothing material is based on the concept of sustainable design. In addition to the surplus of mass-produced clothing, it is composed of contemporary style patchwork; it also uses a large number of technologically functional fabrics and uses oyster shells combined with PET bottles. The 2022 Spring/Summer collection is the third time the brand has landed in Shanghai Fashion Week. The series builds a parallel space-time cosmology around the “Book of Changes”, and uses “time and space” as the conceptual theme to explore the implications of the hexagrams of the Book of Changes: each decision produces a different result. 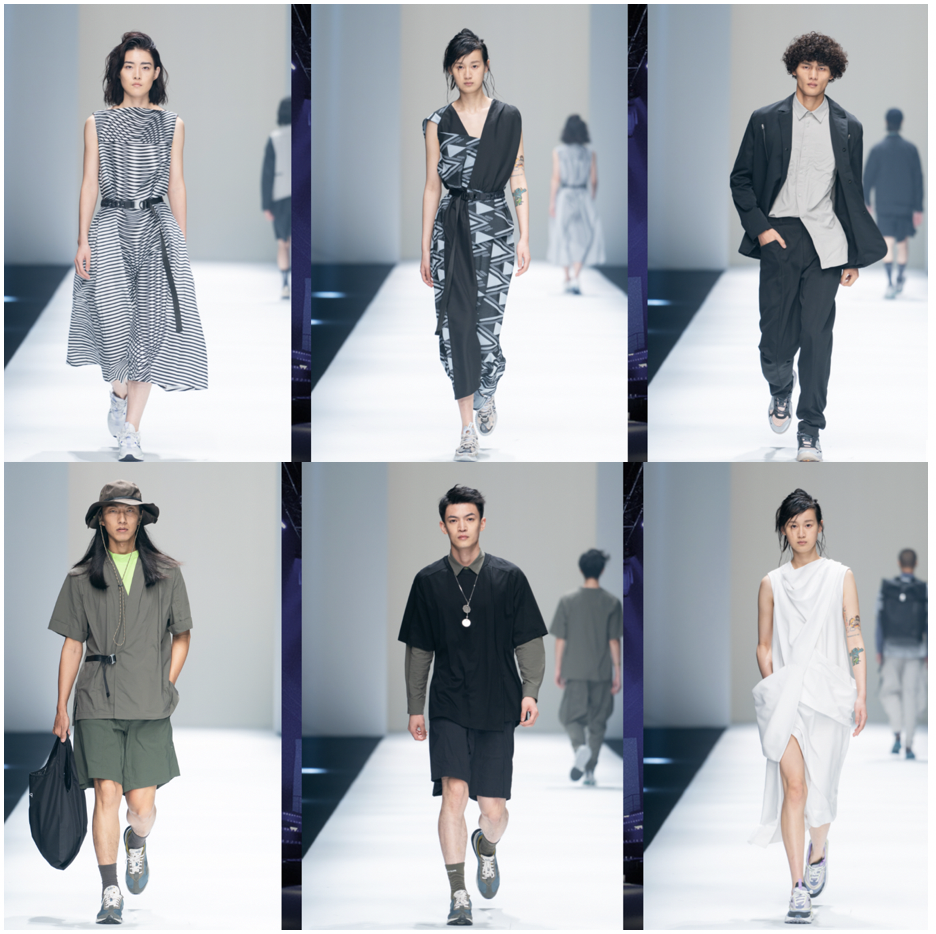 The brand Rizhuo appeared in Shanghai Fashion Week and presented the collection 游侠•寻 (youxia, 遊俠, was a type of ancient Chinese warrior folk hero celebrated in classical Chinese poetry and fictional literature. It literally means "wandering vigilante", but is commonly translated as "knight-errant"). This is the first time the brand has released a fashion show in China, since landing in New York fashion week in 2019. The creative background of the "游侠•寻" series is inspired by the journey of Rizhuo designer Lujian Zhang by the minibus of "Ajian Clothing", a mobile clothing company wandering around China, trying to find the forgotten emotions in the process of rural to urbanization, and the traces of urbanization in rural areas.

During the trip, the designer didn't have a specific itinerary. He went through 38 counties, making clothes for people along the way, trimming the trousers, changing zippers, thinking about designs, and finding inspiration for the elderly and children in the countryside.

In his designs he expressed the sense of change of his personal experience from leaving his hometown to starting a business in the city, looking for the forgotten emotions and traces of the process from the countryside to the urbanization. 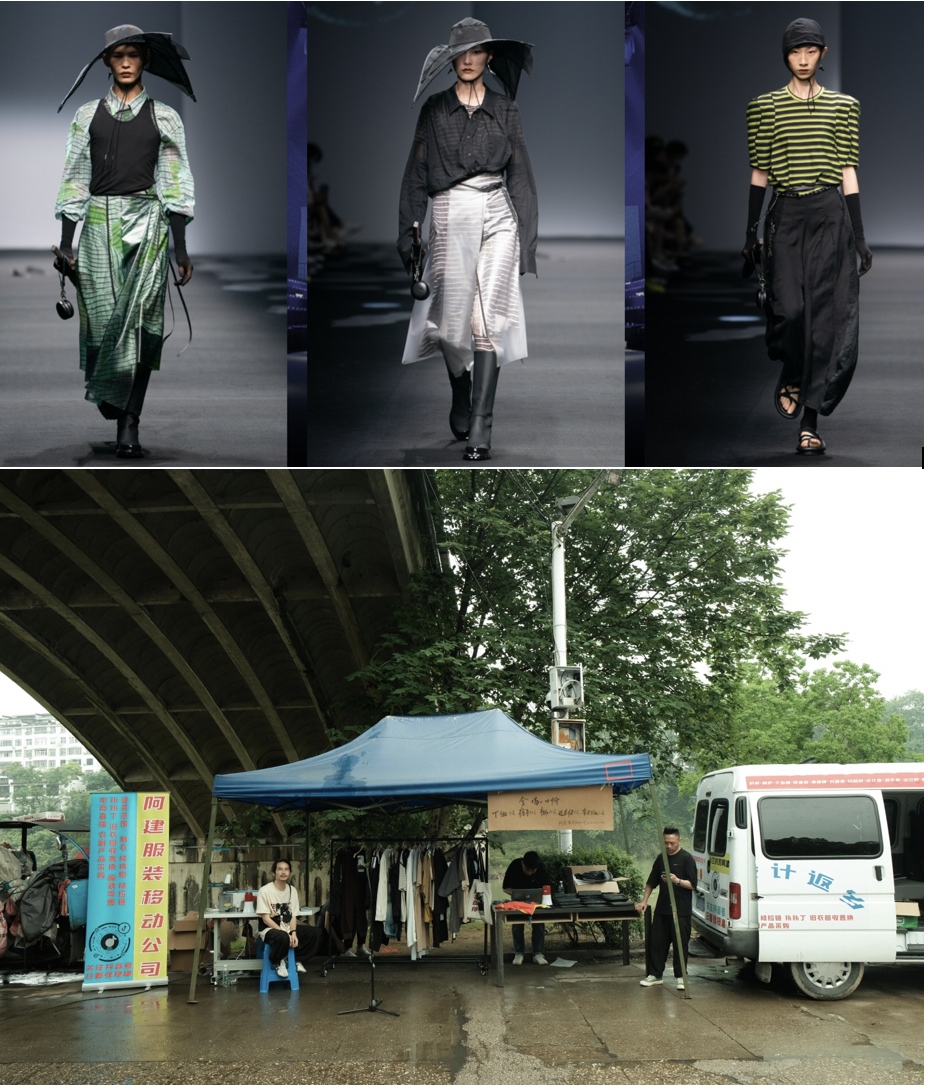 The designer brand SYU SYU HAN was established in 2016 and named after the founder. Her brand concept is being brave, self-aware, unrestrained, sexy, and strong, never following rules and standards from any fashion authorities. Just like the brand slogan: SYU SYU HAN design for freethinkers only.  The brand collection is based on the theme of "Retro DISCO". This season, the brand used some sustainable fabrics and redesigned and spliced ​​fragmented fabrics with bright colors and high saturation into color blocks, and reduced waste of resources.

RICO LEE's fashion show "UNDER THE SKY" was divided into three major themes.

"All creatures": This series innovatively adopts the concept of "bio-based nylon". The environmentally friendly dyeing with natural plant dyes gives the fabric a very natural and soft earth color. Abandoning traditional chemical dyes and using natural plant dyes to enhance the comfort of the skin, the color texture is also closer to nature. "Soft Future Industry": The basic core functional materials are lighter and thinner than previous seasons, the textures are more natural and skin-friendly while retaining the original technology and futuristic sense. The addition of natural materials such as silk also adds more intimacy to this technological series. "World": This series is inspired by the oriental knights, using traditional Chinese elements and materials.

For this show, RICO LEE has joined forces with YKK, the Japanese brand environment-friendly, to use, its latest environmental and technological zippers in the show. 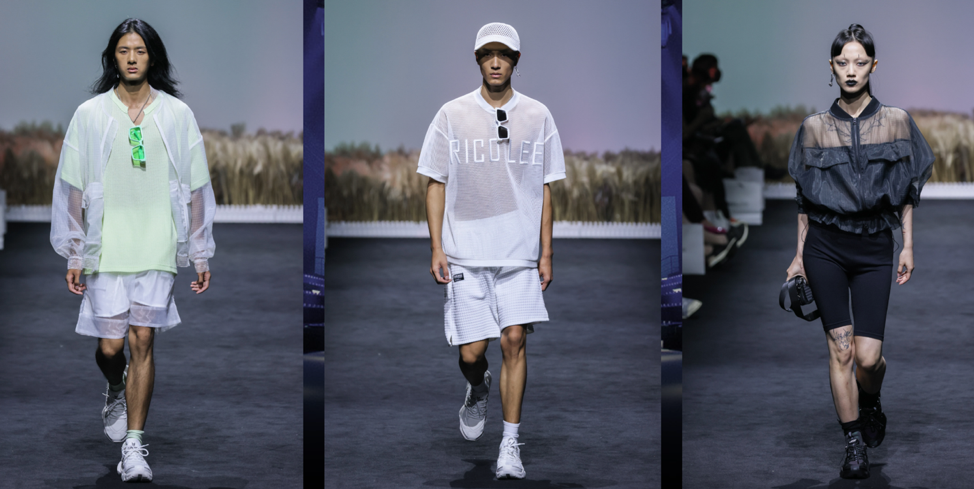 Greel Room started from an obscure street tailor shop and officially debuted at the Shanghai Fashion Week after 7 years. Since the beginning of the brand establishment, the designer has always stood in the store to serve customers personally. This was the first time that the brand has launched a ready-to-wear collection. This series, titled "Princess line", is a tribute to Charles Frederick Worth, the father of haute couture who was also a street tailor, and it is based on the theme of the princess line invented by The House of Worth.

Greel Room's blue-green series and romantic pink-purple series collide, and at the same time, the whole collection blends and harmonize together with the elegant white series. The use of minimalist solid color block highlights the structural lines of the clothing, while the materials used, create a sense of crispness and ultra-feminine style with curvy shapes. 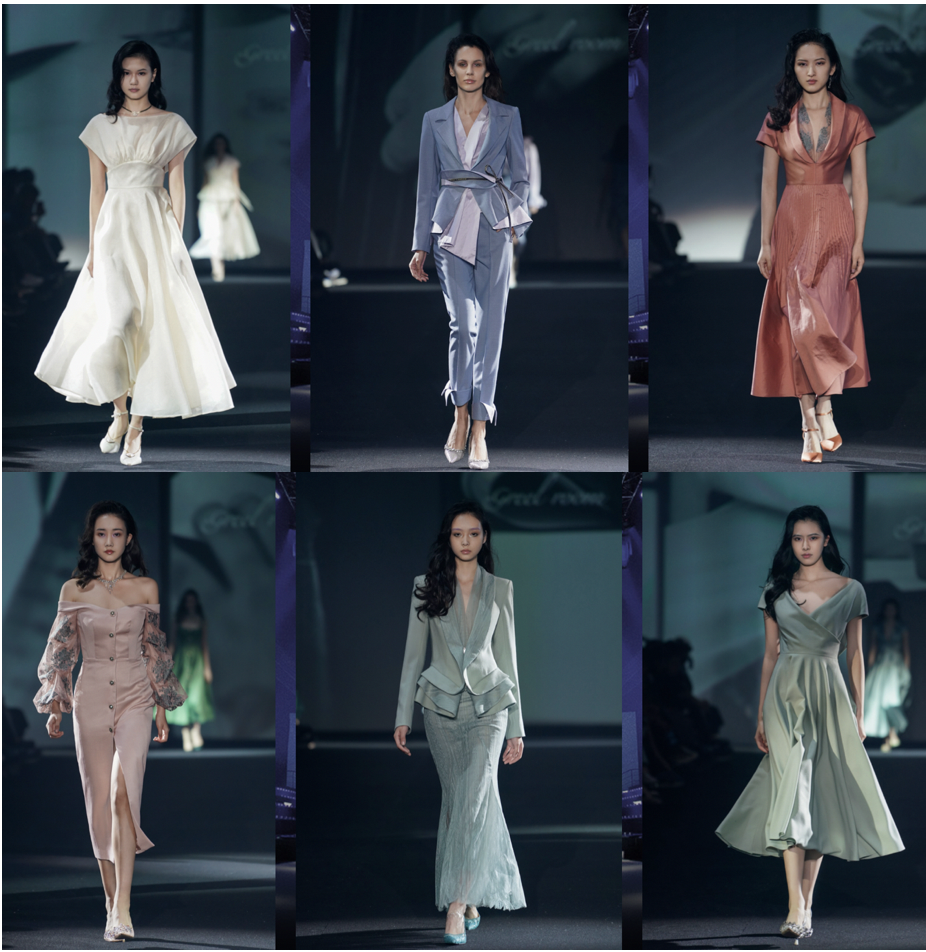 The brand was created by designer Zhou Hao, exploring inner mood against the humanistic society, the designer reflects on the relationship with clothes and amplifies micro feelings into the content of the design. This season’s UNROW 2022 Spring/Summer series is based on the theme of “Party in the Party” and “Me in Me”, inspired by Oscar’s best animated short Polish film "Tango", which aims to convey the designer’s relationship with himself and the surrounding environment during the epidemic. Moonlight gray, woody khaki, moss green, carbon black, etc., constitute the 22SS series of color palettes. 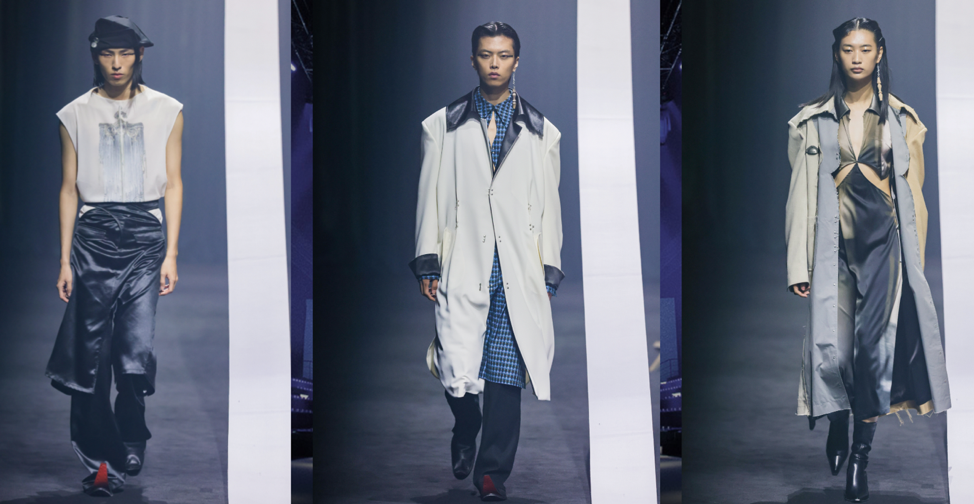