Throughout 2020, in an inspiring show of community spirit, people came together to promote and support their favorite small businesses. Wheat Boutique was lucky enough to receive that same support from its fiercely loyal clients, thriving because of its tireless owners’ determination to make the most out of the desperate situation faced by so many business owners in a deeply challenging year. 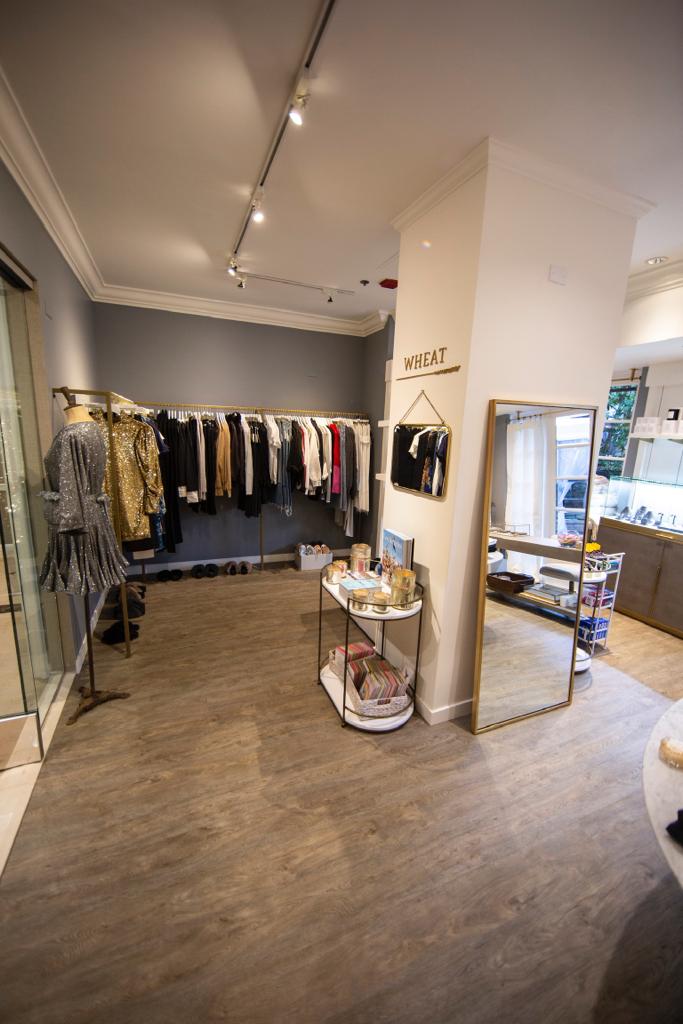 Wheat was founded in York Beach, Maine in 2017 by burgeoning power couple Molly Shaheen & Huw Collins. If you’re a self-proclaimed political junkie, or perhaps have a penchant for must-see television shows, you may already know the couple. On one hand, Molly is the daughter of sitting United States Senator Jeanne Shaheen, and her husband Huw is notable from his time playing the infamous role of Archer Dunhill in the TV show Pretty Little Liars.

Despite their rather different backgrounds, after marrying in 2015 the two quickly discovered they have a strong shared love for fashion, and when they had a moment to conceive of a new venture together, Wheat was born.

During a trip to Paris where the couple visited Coco Chanel’s hallowed apartment on Rue Cambon, the company settled on its name, Wheat; coming after the couple was told the story of Chanel transcending her desperate childhood circumstances, and her subsequent belief in the powerful fortune-bearing symbolism of Wheat.

The duo are finding an exceptional niche with their multi-brand boutique collection, seamlessly combining everything from show-stopping pieces to must-have staples. There are few places you can treat yourself to an exquisite 18K Gold & Diamond tennis necklace, treat the man in your life to luxurious cotton button downs, and keep the little ones happy with titillating light-up bouncy balls, but inexplicably Molly & Huw are finding a way to offer approachable exclusivity - never venturing close to losing the specificity sought out by the most discerning customer.

Even 2020 and everything we have experienced in the last year has not stopped Wheat in its tracks, as Molly & Huw have strived to push forward in the business and fashion worlds. As the Global economy came to a halt, a fourth boutique was opened at The Four Seasons Hotel Los Angeles at Beverly Hills, and their luxury lifestyle clothing line, Wheat 1.17, was introduced. The ultra-soft, ultra-adaptable line encompasses the spirit of the luxury traveler, an underlying strain of inspiration for the brand writ large.

After the Molly & Huw opened their first store location in 2017, they launched an additional three stores, now with two on each coast and more already in the pipeline.

Unwilling to rest on their laurels, Wheat is setting sail to two new Island destinations, Anguilla and then Nantucket, to open their newest boutique locations in 2021. Wheat Anguilla will open during President’s Day weekend this year in the Four Seasons Resort & Residences, bolstering the already close relationship between Wheat and the prestigious Hotel group. Then shortly after, in Spring, Wheat Nantucket will take over the space that was formerly occupied by Pollock’s, an exceptionally popular boutique, owned and operated for over 23 years by something of a local legend, Bob Pollock. Huw & Molly hope to bring their own unique charm, as well as their trademark splash of chic luxury retail, to one of the most popular East Coast vacation destinations.

Wheat has already come so far, and yet the journey is only just beginning.