Many hairdressers are still arguing about the importance of thinning scissors, as some of them say that they can achieve the same result with cutting shears. However, most of them can’t imagine their working routine without thinning scissors. That’s related to the fact that thinning scissors can save a lot of time when creating texture or thinning the dense of the hair. 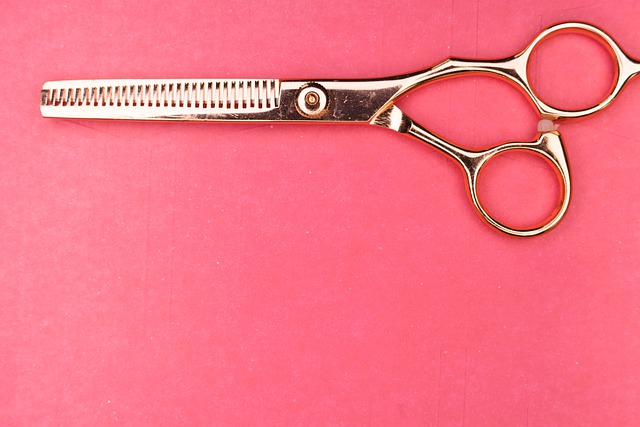 Texturizing shears are the most common among hairstylists. They have around thirty to forty teeth. That amount of teeth helps to create a light texture without chopping off the length.

However, if you need to take away the volume, you should choose chunking thinning scissors. They usually have from ten to twenty teeth and much more space between them. That helps to remove more hair at a time.

Finishing or blending thinning scissors have fourteen to twenty teeth with minimal space between and v-shaped edges. Choose them to create a lighter look and blend the hair sections as the final touch.

The average sizes of thinning scissors are 5.5” and 6” inches. The price depends on the materials, steel type, and design. You can choose shape, color and even add some shiny rocks as an accessory.

Professionals usually have few pairs of shears, including at least a couple of thinning scissors with different amounts of teeth. The fewer teeth they have, the more hair they will cut. That is why the beginners should choose the texturizing shears with more teeth to play it safe.

Now we know the difference between the types of thinning scissors. But to learn how to use them, we should also understand the difference in techniques.

Texturizing hair with thinning scissors involves removing part of the hair on the ends in different directions. Use this technique to create a modern look with softer tips. Even though we remove a part of the hair while thinning it, texturizing can add some volume for some haircuts with layers, as shorter hair will push the longer ones from the inside. It also makes the styling process a lot easier.

Thinning out is the best choice for high-density hair. Use this technique to define the layers and the shape for thick and unruly hair. We have to consider the hair density, as it may vary in each head zone. Therefore, it is imperative to divide your hair into sections and work with them separately. If the selected part is very dense, it may be necessary to work through it several times. Always make sure that your thinning scissors are in good condition and sharp. If the scissors are dull, they can get stuck in the thick hair and break it easily.

When we’ve finished creating the shape using cutting shears, we are going to the final step when we start to use thinning scissors. That is the moment when we should answer some important questions.

The first question is about the hair type you are cutting. For thin hair, you might only need to blend hair sections and soften the hairlines. But if the hair is thick, then thinning scissors is the fastest way to remove excess weight and extra volume.

After you have chosen the technique and the scissors that fit your style of work. Make sure that the hair is dry and there are no tangles or knots along the length. The scissors should go smooth through the hair without pulling it. If you work with extra thick and unruly hair, you may straighten it first to make the process easier.

Now divide the hair into sections that you are going to make thinner. Work through hair sections considering their density. Each section can be divided into smaller stripes if it is necessary. Move the scissors in different directions to blend two hair sections and create a softer look.

If you are trying to blend the layers, use the thinning scissors at the middle point where the two different hair sections meet.

If you want to remove the weight from the thick hair, move the blades in the gliding motion while closing them. Imagine it like you are combing the hair with scissors through the whole section with thick hair. You can use the same motion to create a texture on the ends. Just stay focused and don’t move to the middle length.

Sometimes one or two moves with thinning scissors are enough. Therefore, be careful since it is easy to overdo the thinning. Better to start by cutting less. Otherwise, the hair becomes unrulier and starts to go in all directions.

As you can see, using thinning scissors might be tricky. It’s not enough to learn how to use them. For a successful haircut, you should understand when and where to apply this skill. For example, some hair types and some shapes don’t work well with thinning. But don’t worry, all this knowledge will come after some time with experience.