Time for the Youngest at Shanghai Fashion Week: Labelhood

Big names aside, one of the distinct joys of the Chinese edition of the Fashion Week is uncovering new and emerging talents, thanks to the Labelhood section of the event. Here we cover the best and weirdest show of this season Fashion Week at Labelhood. 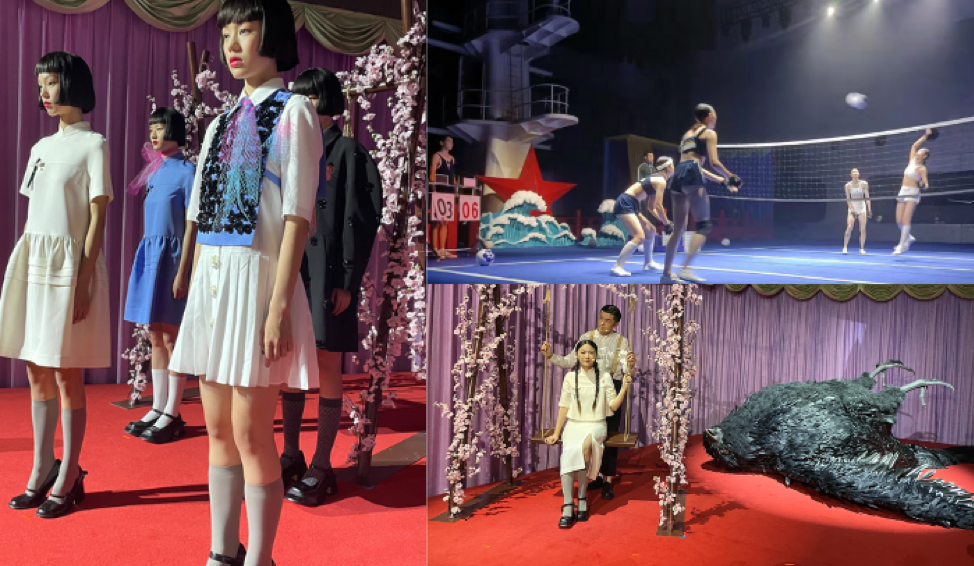 "When a person is alone, the only person who continues to accompany us is our shadow." With the epidemic, people face separation in reality and solitude in spirit. In the 2022 Spring/Summer series, “A Solitary Place 独处之地”, RUOHAN uses the feeling of getting along with furniture, light, and shadow, tells a story about being alone, and rethinks the meaning of being alone. Traditional linen has a silk luster after special treatment. The matte-treated organza imitates the haziness of light and shadow. The designer, also, exaggerated the characteristics of home clothing, hoping to bring the lazy and comfortable feeling of home to daily outdoor wear. The inspiration for bags and accessories comes from home furnishings. RUOHAN is an everyday luxury womenswear brand launched in New York City, 2020. 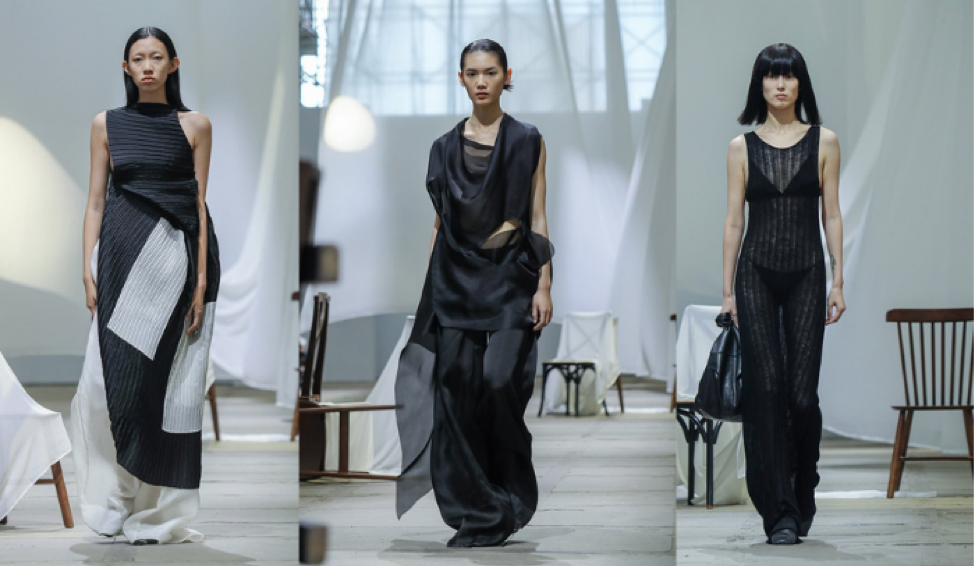 Chosen designers of the “RISE UP Sustainable Fashion Design Challenge” brought their sustainable series to the LABELHOOD SS2022 show. The “RISE UP Sustainable Fashion Design Challenge” was initiated by the sustainable fashion innovation platform “RISE Sustainable Fashion Lab” and co-sponsored by LABELHOOD’s youth student fashion incubation platform YOUTOPIA, aiming to inspire designers to rebuild the entire life cycle of clothing, thinking about the design process, focusing on the selection of sustainable materials. The challenge was launched on April 12. A total of 67 Chinese fashion designers signed up for the competition. The judges from sustainability, fashion and industry finally selected five groups of designers (Lin Jinjing, Xu Shangqian and Lai, AESTHETIC PILL, RUN TAN DU and Permission To Be Human) to showcase their collection at the Shanghai Fashion Week show. Timberland participated in the event. 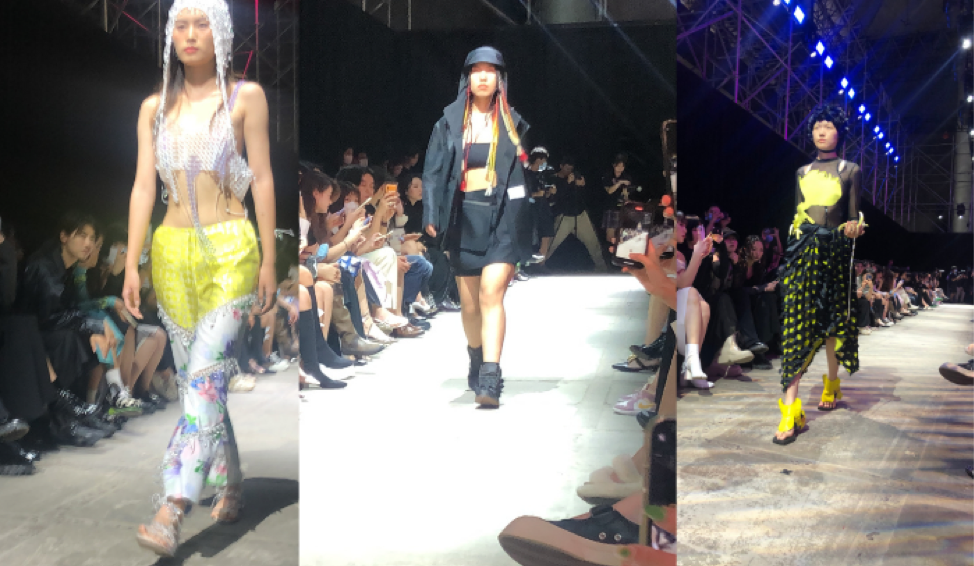 Establishing on the designer’s textile design background, Swaying/knit is a brand that tries to express intangible feelings in tangible ways, combining a mix of different materials and variations of knitting structure. Garments from SWAYING aim to sketch out a gentle, tenacious, and independent female image. In the latest collection, “Skin-ship”, Silk organza yarn and water-soluble cashmere are combined in an unconventional way, retaining the lightness and hazy of organza and the softness and comfort of cashmere, showing a more complex and subtle texture. Hollow crochet stitches and dense weaves are interlaced to present more interesting changes. 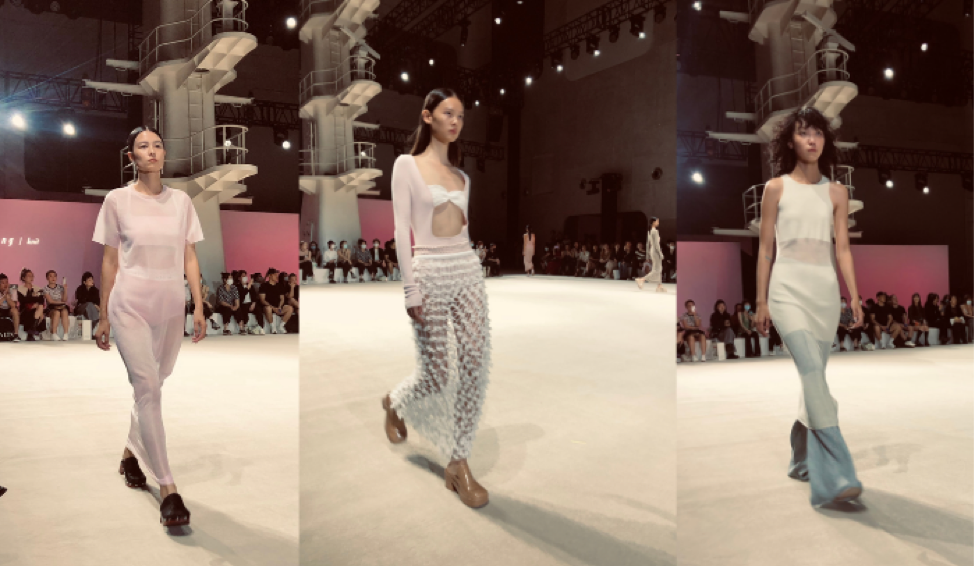 Refuse Club is a New York-based unisex brand founded in 2018 by two friends from Parsons, Yuner Shao and Stef Puzhen Zhou. Taking its name from the historic “Salon des Refusés” (a mid-19th century exhibition in Paris that showcased paintings that were rejected for being too scandalous by the official Paris Salon), Refuse Club is a place to share uncompromising aesthetics and diverse cultural/ political conversations. The brand is also a platform for community and a display of solidarity with #MeToo victims in China. This year's collection theme,  "Lunacide", carries the freedom and sovereignty that women continue to fight for themselves. The designer incorporates elements of military uniforms that frequently appear in road movies into the design. 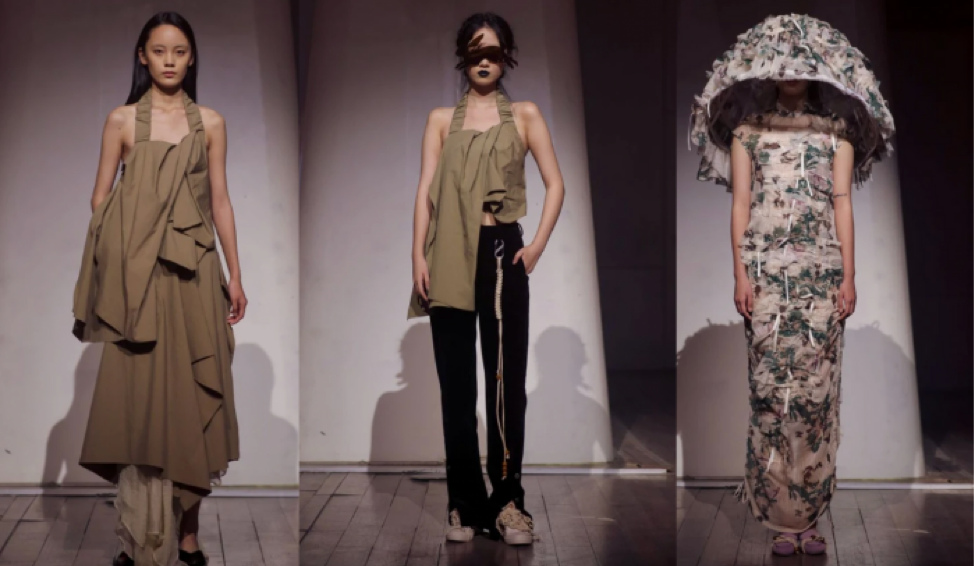 Anno Mundi was established by the founder Zhu Yi in 2016. With unique design perspectives and new black-and-white style concepts, the brand is good at capturing aesthetic elements in myths and fables, focusing on alternative interpretations of romantic imagery, and trying to break the stereotype of femininity. Exploring, deconstructing, and reshaping romantic elements, it presents an independent aesthetic concept image of romantic post-punk new women. This year Anno Mundi teamed up with the independent rock band "Stolen 秘密行动" and the "diversified" voguing dancer group for experimental performance, combining rock music, voguing dance, and catwalks to shape the fashion show "Renovate重塑" visual and auditory senses. 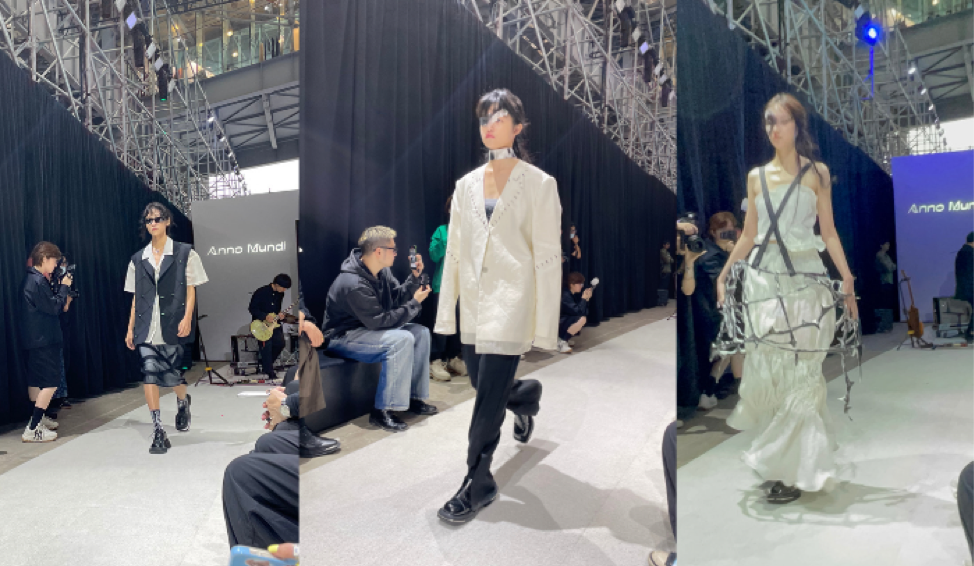 Founded by Jiaen Cai, after graduating from London College of Fashion and the Royal College of Art, he combines influences from his upbringing in China with Western methodology. Combining design innovation with his attention to detail, the brand presents a collection of base layers and components. These components are interchangeable using the JE CAI Algorithmic Modular System [AMS], allowing products to be engineered to form individual expressions. In other words, JE CAI outfits can be disassembled into individual pieces, and then re-spliced ​​freely, which also brings almost unlimited matching possibilities. New series parts can be interchanged with old series parts to reduce waste. 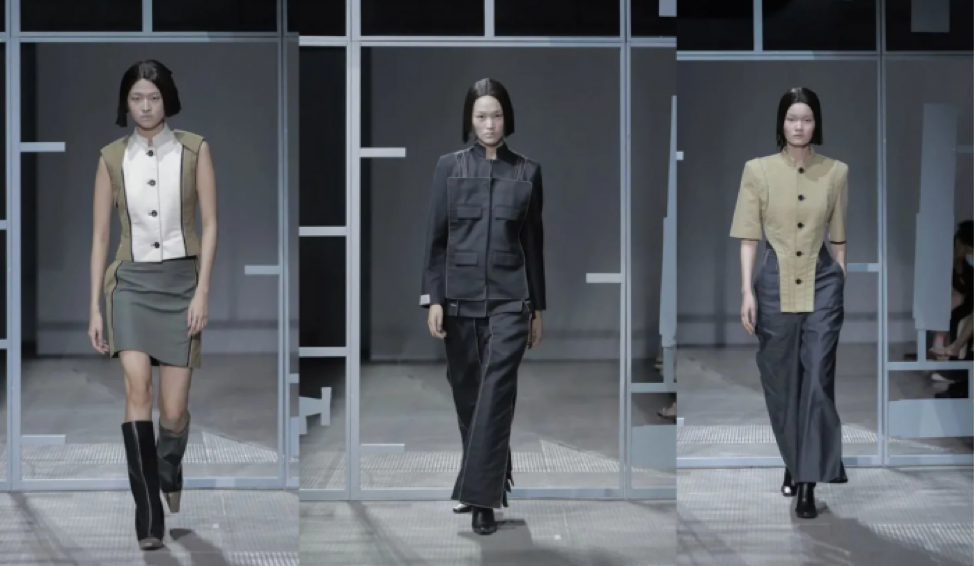 Founded in 2017, Shanghai-based OUDE WAAG is quickly earning a reputation as a rising force in Chinese luxury. Founded by designer Jingwei Yin, he describes the brand as "like keeping a diary" - an evolving record of human experience, punctuated by small, abstract moments of emotion and intimacy. OUDE WAAG aesthetic is characterized by its intellectual and empathetic approach to the relationship between mind, clothing, and body. This season the brand continued its exploration of women and the body, and for the first time presented its aesthetic view with the sculpture "Imperfect Body", and launched the discussion on the body from a diversified perspective. 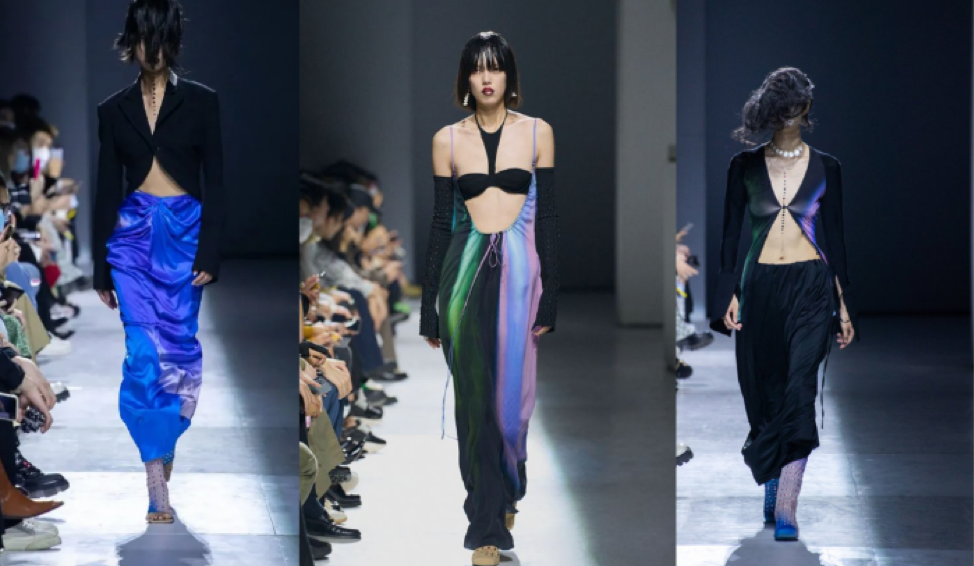 The brand has its unique universe, in which there is neither fixed time or space nor gender or age. The brand, an avant-garde style for unisex, was created in Paris, and the first collection was released this year during Paris Fashion Week.  THE WALL COLLECTION 2021 took the public to explore and discuss the invisible but tangible walls, those rooted in the depths of human nature, but also a wall that will break or collapse. 15 of the 16 models wore "black face" makeup, which comes from the unique wedding customs of the Miao ethnic minority. According to the custom, the darker the wiping, the better; it means that the bride will have a lot of blessings and happiness after marrying. The origin of the smearing face comes from a legend in an ancient song of the Miao ethnic minority, and this wedding custom has been passed down to this day. 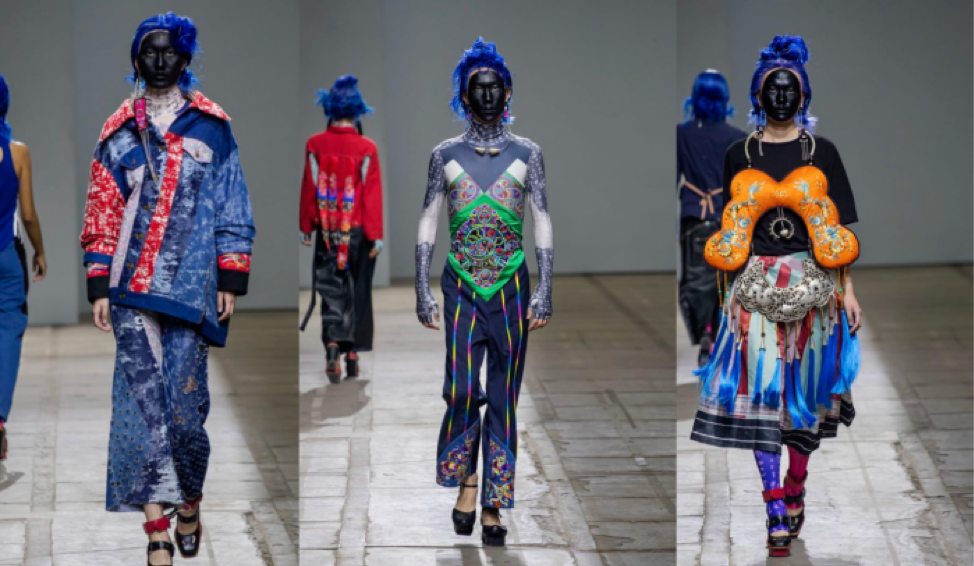